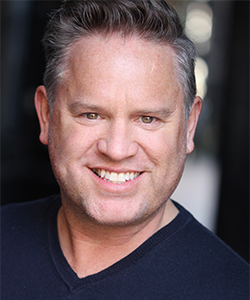 Kenneth is a North American actor and director residing in London. He has 30 years' experience as an actor in the USA, Canada and the UK. He is the co-founder of the International College of Musical Theatre (ICMT), one of London’s leading drama schools. He has been responsible for overseeing the training of many professional actors who have passed through the academy. His students have gone on to BIG things – West End, UK & World Tours, & TV.

He most recently appeared on stage in the critically acclaimed production of VIOLET, at the Charing Cross Theatre in London.

He was the director of the Broadway Revival Version of the musical GODSPELL for the UK TOUR. He directed the one-off concert last May at the Lyric Theatre, West End to huge sell-out success. This resulted in the Producers securing the exclusive rights from Stephen Schwartz for a UK Tour, which begins in April at the Hackney Empire Theatre in London.

Kenneth has appeared in the original casts of THE PRODUCERS, RAGTIME, 125th STREET, THE DROWSY CHAPERONE and SWEET CHARITY in London’s West End. He has also appeared at Chichester Festival Theatre in THE MUSIC MAN and was a lead singer with Bournemouth Symphony’s MAMMA MIA in Concert. He played the role of Jason in the European premiere of ORDINARY DAYS at the Finborough Theatre, London and in his own musical co-written with Mark Goldthorp, THE SINGING TEACHER at the White Bear Theatre
Contact me
© Copyright 2022 Kenneth Avery-Clark